A Race for Boone’s Trace

Lexington, KY – July 8th, 2019 – Buckeye Junior Golf Tour held its Kentucky finale this weekend at Boone’s Trace National Golf Club in Richmond, Kentucky. Boone’s Trace is just a short drive from Lexington and is the home course of Eastern Kentucky University. A beautiful course set in the rolling hills of Central Kentucky; Boone’s Trace featured one of the highest slope ratings ever played on BJGT. With its large amount of lateral hazard and Out of Bounds, it proved to be an extremely tough course. Let’s dive into our 4th of July weekend tournament.

Round 1 – Saturday, July 6th – Whew, was it a scorcher out this weekend in Kentucky. Temperatures were in the low 90’s but with very little breeze and extremely high humidity, the round continued to get hotter and hotter as the day progressed. With the sun beating down on the Boys 14-19 Division, Hole-15 gave them the most trouble on the day. A 393-Yard Par-4 that looked easy on the scorecard proved to be anything but. An extremely tight gap tee shot is presented to start the hole. A lefty or righty can run into trouble, as any sort of fade or draw on the ball would surely put you into the lateral hazard that sits on the left side. Out of Bounds looms on the right, but staying right might be considered the smart play because it puts you above the hole with a short iron shot to the green. Jackson Miller from Cincinnati, Ohio and Wade Worthington from Evansville, Indiana played the hole extremely smart, using well timed course management, both players found pars and gained a stroke on the entire field. Hole-10, the second hardest hole on the course, was actually playing the easiest in Round 1. A slight dog-leg with an extremely slanted fairway sits before you at the tee box. Anything on the left side of the fairway may take an unfriendly bounce and put you into the lateral hazard pond or into the thick stuff. Wade Worthington once again gets featured here by playing the hole to perfection. Wade uses his height and strength to crush balls off the tee. Using his advantages on this hole he once again gained a stroke on the entire field with a birdie. Tyler Allred from Crestwood, Kentucky came in as our Round 1 Leader. Tyler is becoming the player to beat on tour in Kentucky as he now has led all 3 of his BJGT Rounds this season up to this point.

Sy McDaniel a local from Lexington, led the charge for the Boys 10-13 Division. Sy finished with nothing higher than a Double Bogey on this extremely difficult course. Sy even found Par on the First Hole out at Boone’s Trace, which is the hardest hole on the course. Well done Sy, not an easy feat!

Round 2-Sunday, June 23rd – With the humidity already at 86% for our morning tee times, keeping a cool head was going to be an important aspect of Round 2. I think most of our golfers could use Sunday’s Round as a testimonial to how much physical fitness is needed in golf. Walking 8-10 miles up and down Kentucky hills with temperatures in the 90’s and 80% humidity for FOUR AND A HALF HOURS…it speaks for itself. This same course will be walked from the same tee markers by grown men that are looking to qualify for the Barbasol Championship this coming week (and they have Caddies…). This is a true testament to how hard our junior golfers work and that this game not only takes mental toughness, but physical fitness as well. Speaking of toughness, Hole-12 was the hardest hole in Round 2 for our Boys 14-19. Another tough tee shot with a hill on the right side of the fairway and lateral hazard on the left, accuracy was once again key. It should be mentioned that the lateral hazard at Boone’s offers almost zero chance of using the ‘play it as it lies’ option because the hazard is so thick. Putting your ball into one of these well-placed hazards will almost certainly result in a drop. Playing below Par in Round 2, Hole-7 was the easiest hole. This extremely short Par-4 is one of the few Birdie opportunities on the Front-9. A slight dogleg right, putting your ball into position for an easy wedge shot is the way to go here. Tyler Allred and Wade Worthington would continue leading the pack as they both gained strokes on the rest of the field with birdies.

Tyler Allred played an even better Round 2, widening his 2-stroke lead to come in as our Champion. Tyler now sits with Colin McKinney of Canonsburg, Pennsylvania to be the only player with 2 Wins on tour this year and Tyler has done it in just 2 Tournaments. Tyler had many key stats this weekend but the most important one was having the Most Pars. If you read our press releases regularly you know that the player with the Most Pars almost always comes in with the Win. Tyler also played the harder Front-9 the best out of anyone. Tyler won the event by 10 Strokes, the biggest stroke win by any player in BJGT history. Tyler gained almost all of those strokes on Par-4’s playing them 8 strokes better than anyone else in the tournament. Tyler sets a great example on our tour by always supporting his fellow players in his group and coming in with a cool, calm and collected demeanor throughout his rounds. Great job on another win Tyler!

Coleman Miller from Cincinnati, Ohio came in as our Co-Runner-Up. Coleman has been featured a lot the last couple of weeks as he is playing some spectacular golf! If you’re a spectator that ever wants to watch Coleman play, just look for his signature bucket hat and big smile. This 14-year old continues to impress everyone that he plays with and now has 3 Runner-Up finishes in as many tournaments this Summer as he shooting up the Player of the Year Standings. Coleman had a Par or Better in 75% of his Par-3’s this weekend. Coleman also had a Bogey Free Streak of 5 Holes in Round 1 on the hardest stretch of the course from Holes 10-14. Playing with older brother Jackson next year at Anderson High School, they will truly be a fun team to watch over the next 2 years.

Wade Worthington came in as our other Co-Runner-Up. Wade now has 2 Runner-Up finishes in as many tournaments on Buckeye Junior Golf Tour. Wade has a lot of power off the tee and uses it to pick up birdies all over the course, snagging the most in the tournament with 5. Wade also played the Back-9 the best in the tournament. 66% of the holes he played on the back he either Parred or Birdied. This is an extremely impressive stat with the heat being such a factor this weekend. As most of the field started to get tired by the Back-9 in both Rounds, Wade stayed strong and was able to pick up a lot of strokes on his opponents. Wade is looking to continue his golf career into the college ranks and if he continues to play the way he did this weekend, he will have an extremely successful career (hopefully the same will not be said for his Pittsburgh Steelers this coming season).

Sy McDaniels would continue a great run in the Boys 10-13 Division by beating his Round 1 score on Sunday. Sy is just 10 Years old but his distance off the tee is already something to be admired. Scoring 5 Pars on 8 Par-5’s and having nothing higher than a Bogey on any of them for the entire tournament is incredible, especially on a course like Boone’s Trace. Sy owned the hardest hole on the Course going Even on Hole-1 throughout the tournament. Sy has been practicing really hard for the Junior Worlds down in Pinehurst in a couple weeks and if he plays as well as he did this past weekend, he will surely come in at the top of the Leaderboard. Great job Sy!!

Great Job to all of our players this weekend for playing some great golf at one of the hardest courses we have ever played. All of you had great attitudes and were extremely fun to watch. Thank you as always to all of our parents and spectators who made it out this weekend. We appreciate you helping to shuttle the players on what would have been an extremely hard walk and for making sure everyone stayed hydrated. Well done to Scott McDaniel on some great Caddie work for his son Sy! We also want to thank some of the best course staff we have had the pleasure of working with, specifically Tom Giacchini, Cam Rutherford and his parents Chris and Kelly Rutherford. They run a fantastic facility at Boone’s Trace and we want to thank them for allowing our players and parents to enjoy one of the best courses in Kentucky. The year is winding down so we hope to see many of you out at our last couple of events of the year! 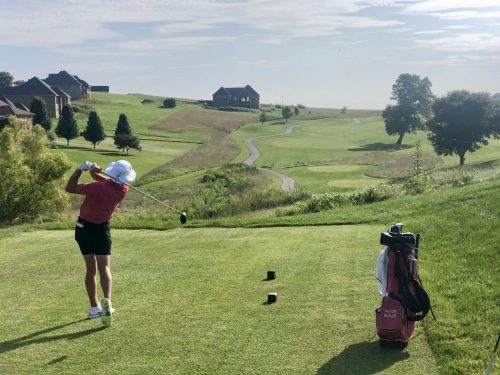 Coleman Miller is this week’s Player of the Week. Coleman earns his 3rd Runner-Up finish in a row. He must like the College Courses with all of his Runner-Up finishes coming at the University of Kentucky, Denison University and Eastern Kentucky University Courses. Coleman now sits as our Birdie Champion on Par-4’s, for players with 3 tournaments or more on the year. He birdies them at a 9% average. Great job Cole!