A Tale of Two Nines

Aberdeen, MD – May 13th, 2019 — Buckeye Junior Golf Tour held its first ever event in Maryland this weekend at The Wetlands Golf Club in Aberdeen, Maryland. This course features a plethora of hazards from long fescue, water hazard carries and numerous wasteland bunkers to make for a challenging course layout. The front 9 out at the Wetlands has a much higher rating than the back 9 which added difficulty to a competitive weekend.

Round 1 – Saturday May 11th — Round 1 was a beautiful day that was partly cloudy and featured temperatures in the low 70s. Weather was not much of a factor, for once, with the real challenge coming from the vast wasteland bunkers throughout the course along with the tall grass that comes into play on almost every hole. The Boys were having the most trouble with the 9th hole on the weekend. This long dog-leg right takes strategic placement for a par. The tee shot must be long enough to reach the very edge of the dog-leg to have a clear shot at the green. Players also had to be accurate off the tee, for even the slightest bit right and you will find yourself in jail in a small forest, left in hazard or a bunker. The Boys found the 14th hole to be playing the easiest on the day. The tee shot is over a hazard and anything left would go Out of Bounds, so an accurate tee shot with some loft is needed to find a birdie on this hole. The rather short yardage of 452-yards rewarded those players that stayed in the fairway. 3 Local Maryland players that included Patrick Rowland, E. Brooks and Daniel Kibe played this hole to perfection and earned birdies. Jack Bissonnette, our youngest competitor in the division, had a great highlight of the tournament sinking a super deep putt on 18 to save par. Jeremy Bershak from Sykesville, Maryland came in as the Round 1 Leader and eventual Champion. This is Jeremy’s 4th-Top 10 Finish and 1st Win on tour this year as he continues to improve every tournament. As an ongoing theme of Winners on tour this year, Jeremy had the most Pars in the tournament. Jeremy also dominated on the much harder Front-9 and played the Par-3’s and Par-4’s the best in the tournament. Jeremy is one of the most positive members on tour and it was great to see him earn his first victory! Congrats Jeremy! Patrick Rowland from Monkton, Maryland came in as the tournament Runner-Up for the Boys. This is Patrick’s second Runner-Up finish in as many tournaments. Patrick is an extremely consistent golfer, with his cool, calm and confident demeanor Patrick never seems to let his bad holes, which are few and far between, bother him. Patrick was the only player to have a birdie or better streak and was one of three players to have a Back-9 score of 37. Patrick’s High School Team, St. Paul, will be playing in the Maryland State Semi-Finals on Wednesday. We want to wish him good luck and we hope they make it to the State Finals! Congratulations Patrick!

The Girls on the other hand were finding the most trouble on the tough 358-yard, par-4, 13th-hole. You must be extremely accurate on your tee shot for this hole as it features a wasteland bunker stretching the entire length of the fairway. Finding yourself in one of these bunkers will surely lead to a bogey or worse because a shot must be wasted hitting a wedge out of the bunker. On the other hand, the Girls found Hole-15 to be playing the easiest in the tournament. This hole is almost identical to Hole-13 except it is shorter and the bunkers are guarding the green instead of the fairways. Erica Honadel from Bel Air, Maryland came in as the Round 1 Leader and Champion. This is Erica’s 2nd win in 3 tournaments on tour this year. Just like almost all of our other Tout Champions, Erica had the most pars in the tournament. She also dominated the Par-4s. You may have seen Erica’s name from our Gettysburg Junior Championship press release where she broke the BJGT Girls 14-19, 18-hole and 36-hole scoring records. Congratulations Erica! Kirstyn Collins from Olney, Maryland came in as our Division Runner-Up. Kirstyn played the Par-3s and Par-5s very close to Erica in the tournament. Kirstyn played the much harder Front-9 better than the Back-9, something not many were able to do. Kirstyn also has great course knowledge playing the easier holes on the course extremely well. Congratulations on your Runner-Up Finish Kirstyn!

Round 2 – Sunday April 7th — Round 2 was cancelled due to over an inch of rain falling within 12 hours, resulting in saturated course conditions and flooded greens. BJGT wants to thank all of the parents and spectators for a great first tournament in Maryland. Thank you to all of our participants as well who braved the weather for a few holes in Round 2 as the heavy rain came down. BJGT staff wants to wish all the Mom’s that are part of our tour a Happy Mother’s Day! Special thanks to Randi Bershak, Lynn Rowland, Cassandra Crawford, Natalie Bissonnette and Elizabeth Brooks for spending their Mother’s Day weekend at the course and supporting their junior golfers. We also want to thank the wonderful and helpful staff at The Wetlands for their help and support throughout the tournament. A special thanks to Bruce Densmore, Owner Sam Smedley and Beth Boyson for their help and for letting us host a tournament at their beautiful course. We hope to see you at some of the upcoming events in the area this season! 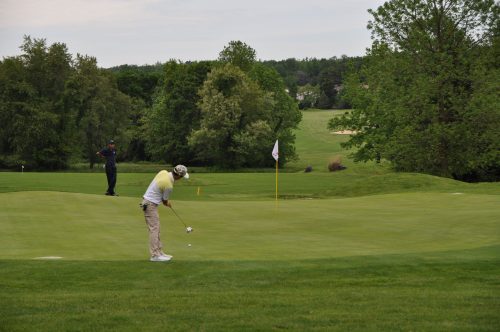 This week’s Player of the Week is Jeremy Bershak. Jeremy is a Sophomore at McDonogh School in Owings Mills, Maryland. Jeremy had the most Pars in the tournament. Jeremy also shot Even on the Par-3s and shot the best on the Front-9. Jeremy now has 4 Top-10 finishes on Tour this year. Congratulations Jeremy!