Round 1 – Saturday May 25th — For the third weekend in a row we had beautiful weather for Round 1. A slight breeze and sunshine for our morning tee times was the perfect start to Memorial Day weekend. The Boys 16-19 unphased from a day on the course played Hole 17 the best in Round 1. The 17th has an extremely low handicap but can be deceivingly tricky. Out of Bounds on the left that meets a lateral hazard creek/pond is the first obstacle to get through. A solid tee shot is needed for this dog-leg left hole but stray too far right and you might find yourself in the fairway bunker or the lateral hazard that stretches down the entire right side. This hole also features a Briarwood signature of trees, Moss trees line the pond on the left. This is your typical American Style golf hole. A creek 120 yards out from the green forces you to either layup or go for it on this Par-5. A lack of distance on your second shot may turn a great back-9 score into a mediocre one. E. Alexander Brooks from Adelphi, MD with his terrific iron play was one who played this hole true to its low handicap. E. put his second shot within a couple feet from the hole and secured an “E”agle. Apparently not good enough, E.’s reaction to his Eagle, “It should’ve gone in!?” A plethora of birdies came in from the Division on this hole as well, one from each Devin Smith, Reese Watson and Edward Honadel. The Boys flip flopped on the next hole playing Hole 18 the worst in Round 1. This is the hardest hole on the golf course, with its long distance of 421-yards, it makes for a tough Par-4. Challenging the hole can be difficult as the Driving Range is Out of Bounds and sits on the right side of the slight dog-leg. Two local players, Reese Watson from Mechanicsburg, PA and Jacob Carlin from Fayetteville, PA used their course knowledge to grab pars, as the rest of the field struggled. Devin Smith from Waynesboro, PA shot a 2-over, 74, and came in as our Round 1 Leader. Our Boys 14-15 Division started the Round in great fashion. The Boys played Hole 2 the best in Round 1. One of the 3 Par-5’s on the front-9, this 500-yard hole was no match for our younger Boys. A seemingly tough tee shot actually leaves room for error on either side. The main defenses of the hole are strategically placed bunkers and a lateral hazard pond that will only swallow up the most errand of tee shots. Matthew Curtis from Malvern, PA used his booming drive to find a birdie on the 2nd hole. Matthew is extremely impressive off the tee and can absolutely crush a drive for his age. Just like the older Boys, the 18th Hole proved to be a challenge and was playing the toughest for the younger Boys in Round 1. Teeing off from almost the same spot as the older Division, no pars were found on the hole from the younger Boys. Colin Vineberg from Sparks, Maryland shot a stellar 77 and came in as our Round 1 Leader for the Division.

Our Girls 14-19 Division switchedf it up and played Hole-5 the best in Round 1. This downhill Par-5 rewards the long hitters. Not much accuracy is needed on a tee shot as the hole is wide and open, however finding the fairway does allow for a much easier iron shot onto the green for a possible birdie look. That is exactly what McKylie Boreman and Ella Lowry did, snagging birdies and bringing McKylie back to Even par after 5 Holes. Our Girls found Hole-9 to play the toughest in Round 1. A double-dog leg Par-5 with distance to match the toughness was playing extremely tough from the Buckeye-Red tees. No pars were found from the Field, but the Girls knew an easier Back-9 awaited them at the turn. McKylie Boreman shot a Round 1, 80, to come in as our Girls Division Round 1 Leader.

Round 2 – Sunday May 26th — Round 2’s weather started off very similar to Round 1 but slowly changed as rising humidity and the threat of isolated thunderstorms loomed all afternoon. The older Boys took some notes from the Girls in Round 1 and found Hole-5 to be playing the easiest in Round 2. Nothing higher than a bogey on this hole showed that players were trying to fight their way back towards Devin at the top of the Leaderboard. Once again, Hole-18 defended its handicap and played the toughest in Round 2. Only Devin Smith, Andrew Roberts and E. Alexander Brooks were able to master this hole on the second day and find pars. Devin Smith’s course knowledge and continued ability to find pars on almost every hole would crown him as Champion at the York Junior Classic. Coming back after a strong 2nd Place finish last season at Briarwood, Devin was adamant this was going to be his year to take home the first-place trophy. Once again, the recurring theme for our Champions on tour this year, Devin had 27 Pars to lead the Division. Devin simply just mastered Briarwood leading the stat page by playing the Par-4’s and Par-5’s the best, having the most birdies and being the only player in the tournament with a birdie streak. Congratulations on your win Devin! Tim Fitzgerald from Sewickley, PA and Andrew Roberts from New Freedom, PA came in as our Division Runner-Ups. Tim is an extremely consistent player and played the Front-9 the 2nd of the field in the tournament. Having never played Briarwood before Tim was still able to master the tough Par-5’s at the course, playing them to Even in the tournament. Congratulations on your Runner-up Finish Tim! Andrew is more of a Par-4 fan, playing them second best on the weekend. Other players at tournaments might know Andrew as the “Ball Whisperer”, he is well known for talking to his ball and telling it what to do, which lead him to a Bogey free steak of 7 Holes in Round 1. Congratulations Andrew!

The younger Boys once again started off Round 2 in a great shape. The Boys played Hole-1 the best in Round 2. Colin Vineberg continued on his great Round 1 performance by birdieing the first hole. The Boys found Hole-8 to be playing the toughest in Round 2. This long but straight downhill Par-3 is hard to judge due to the elevation change and was even more difficult as the wind picked up during Round 2. None of the younger Boys were able to find par, but many worked hard to pick up a bogey and move on. Colin Vineberg stayed extremely consistent throughout the course. Colin is one of the best on tour at staying out of trouble which made it hard to catch him as he came in as the Champion in the Boys 14-15 Division. Colin is now a 2-time Champion at Briarwood. Once again Colin continued the theme of Champions by having the most pars. Colin played the Par-4’s the best and he also played the Front-9 and Back-9 the best in his age Division. Congratulations on another win at Briarwood, Colin! Andrew Trider from Cockeysville, MD was the Runner-Up in the Division. Andrew is great off the tee and has a strong golf career ahead of him as he takes on the Par-5’s with relative ease. Andrew plays to his strengths with his great distance and lead the Division in birdies in the tournament. Congratulations Andrew!

The Girls followed up the Younger Boys strong play on Hole 2 and played it the best. Hitting one of the side hills with your tee shot on Hole-2 can cause your ball to run and add significant distance to your drive. Tristan Groff, a local from Lancaster, PA and our youngest player in the tournament, played all the Par-5’s great in Round 2 and found a par on this hole. Erica Honadel followed this up with a par for herself. The toughest hole for the Girls in Round 2 was Hole-14. Almost a mirror image of Hole-8, this downhill Par-3 is tough to judge. Add in some swirling winds from the oncoming storm and a very small green and you can imagine why this Hole was playing so difficult. McKylie Boreman from New Cumberland, PA continued her strong performance from Round 1 and came in as our Division Champion. Much like Devin, McKylie finished in 2nd place last year at Briarwood and was determined to get a win this time around. McKylie dominated almost every statistical category in the Division. McKylie’s most impressive stat of the weekend was her scores on the much harder Front-9 at Briarwood. Racking up 7-Pars and 2-Birdies on these Holes proved to be the difference maker in crowning her Champion. Congratulations McKylie! Ella Lowry from Waynesboro, PA took the Runner-Up spot in the Division. Ella is just a Freshman at Waynesboro High School and will be a force to be reckoned with for years to come against her opponents. Ella is a Par-3 master and was just one shot back from McKylie on them for the tournament. Ella also was able to tie for the lead in Birdies and Par Breakers. Congratulations Ella!

We first want to thank all of the Men and Women who have served in the Military, we appreciate everything you do and have done for our country. We also want to thank all the players, parents and spectators for spending their Memorial Day weekend at Briarwood Golf Clubs with us. Finally, we want to thank the wonderful Staff at Briarwood for being with BJGT since the beginning, they were the very first course we booked for our first season in 2018 and continue to offer a great venue and their support. Specifically, we want to thank Mike Skelly, Rick Saxon and all the cart boys for shuttling our players and parents back out on the course after the rain delay. We hope to see all of you again on tour this season! 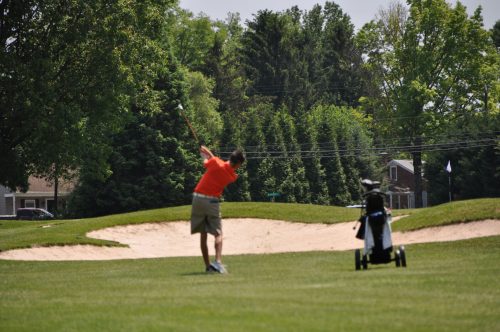 Devin is a Sophomore at Waynesboro Area High School. Devin set BJGT’s All-Time 9-Hole Scoring record this weekend with a 33 on the Back-9 at Briarwood-East. Devin also tied BJGT’s All-Time 9-Hole Relative to Par Record by going -2 on the Back-9 in Round 2. Devin now sits Tied for 2nd in BJGT Scoring Average on the season with an average Round Score of 77.5. Great Job Devin!