Round 1-Saturday March 23rd– Saturday started off with a half hour frost delay. We saw typical Ohio weather reaching down into the mid 20’s and then climbing up into the mid-50’s with little to no wind all day. Starting on the back, our 14-19 Boys Division seemed to have the most trouble on the 521-yard, par-5, 11thhole. The Boys made the turn in style playing the short and flat Hole #1 to par on the day. Rylan Wotherspoon from Florence, Kentucky led the charge for the Boys 14-19 Division on Saturday shooting a new 18-Hole Scoring Record for BJGT by posting a First Round 71. Rylan’s Record score came with 4 Birdies, 3 Bogeys and 11 Pars. Hole #11 gave the girls trouble as well, as none of them were able to par the hole. The Girl’s stormed back and made the most of the 18th-handicap, par-3, 13thhole. Paige Zolciak from Perrysburg, Ohio, Elizabeth Chamberlin from Cincinnati, Ohio and Samantha DeSpain from Englewood, Ohio were all able to grab pars on the hole. Brooke Devolld from Ashville, Ohio came in as our Girls 14-19 Leader in Round 1. Brooke seemed to have everything working for her as she was able to put in pars on each a par 3, 4 and 5. Our Boys 10-13 Division, much like their older counterparts, also found trouble on Hole #11. The Boys were able to take advantage of the Par-3 8th-Hole and play it the best on the day. Eain Atisha from Lathrup Village, Michigan came in as our Round 1 Leader for the Boys 10-13 Division. Big shout out to our youngest participant Jackson Hucke from Dayton, Ohio on playing in his first 36-hole tournament and making two 20 ft plus putts on the day! The Girls 10-13 Division featured some great talent this weekend. The Girls agreed with the consensus by finding the 1-Handicap, Par-4 5thHole to be playing the hardest. The tight gap and water hazard running across this hole make it a sight to see but one of the hardest holes in the Dayton area. The Girls once again agreed with the majority by finding the 18th-handicap, par-3 13thHole to be play the easiest. Round 1 Leader Sata Kertpet from Cincinnati, Ohio and Round 1 2ndplace Maureen Burns from Cincinnati, Ohio were both able to find par on the hole. Sata Kertpet was the Round 1 Leader for the Girls 10-13 with an amazing Round 1 95. Congratulations to Alli Hucke from Dayton, Ohio and Alexis Peterson on playing in their first 36-Hole tournaments! Great job ladies!

Round 2-Sunday, March 24th – The March weather was kind once again to us on Sunday. Starting tee times in the High 40’s with a slight breeze, made for a beautiful day for golf. Once again, the pesky 5thhole was showing why it is one of the hardest holes in the Dayton area. The Older Boys played it 1 stroke above par and found it to be the hardest hole of the day. In a BJGT first, the Boys played the short 148-yard par-3 13thhole to below par on the day! With Birdies from Jackson Miller of Cincinnati, Ohio and Peyton Vanderhoff of Otsego, Michigan it was a good hole to get some strokes back on Rylan Wotherspoon but he would not let his lead up and eventually came in Champion. Rylan broke another record setting the 36-hole BJGT scoring record with a 144. Rylan got his victory by having the most Pars, playing the par 3’s, 4’s and 5’s the best on the weekend and playing both 9’s the best. Congratulations on your first BJGT Victory Rylan! Rylan is a Freshman at Cooper High School in Florence, Kentucky and placed 14thin the State Tournament. Jackson Miller was our Runner-Up. Jackson was able to rival Rylan with his 5 Par-Breakers having at least one on each a par 3, 4 and 5. The Girls 14-19 Division once again found Hole-11 to be playing the hardest. It did produce a couple of pars though from Mailiis Simovart from West Liberty, Ohio and Samantha DeSpain from Englewood, Ohio. The Girls once again found Hole-13 to be playing the easiest in Round 2. Over half the field was able to Par this downhill Par-3. Brooke Devolld held strong with the lead and would not give it up. Brooke was able to keep her lead by having the most pars and playing the tournament a half stroke better on the Par-5’s than her competitors. Great job Brooke! Paige Zolciak our Division Runner-Up was able to keep her 2ndplace finish by playing great on the Par-4’s and Par-5’s all weekend. Our Boys 10-13 Division set the standard for Pace of Play in Round 2. Eain Atisha our Division winner was able to hold is victory by playing the Par-5’s great. Great job Eain! Jackson Hucke our Division Runner-Up was able to improve by 10 strokes in just his second round of tournament play. Our Girls 10-13 had some great competition all weekend. The Girls changed it up a bit and found Hole-6 the longest of the Par 3’s to be playing the easiest. Maureen Burns from Cincinnati, Ohio and Elaina Seeley from Circleville, Ohio were both able to grab pars on this whole. Sata Kertpet from Cincinnati, Ohio was able to hold on to be the Division Champion and finished strong with a 30 ft chip in for Birdie! Sata’s consistency on the Par-4’s helped her to become Division Champ, playing them over a half stroke better than her nearest competition. Way to go Sata! Maureen Burns was the Runner-Up in the Division. Maureen set a personal best and broke 90 for the first time at one of the hardest courses in Dayton! Maureen’s Runner-Up finish came by having the most Par’s on the weekend and playing the Par-5’s almost an entire stroke better than her competition.

We want to thank all of our participants, parents, spectators and the entire staff at Beavercreek Golf Club for such a great start to the season. With such a record setting tournament it was extremely rewarding for the BJGT staff to be a part of this with our players. We hope to see all of you in the near future at some of our other events for the 2019 season! 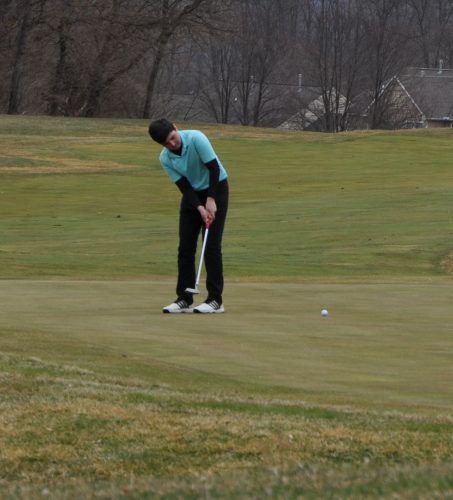 Rylan set BJGT’s all-time score record this weekend with a 71 on Saturday. He also set the all-time tournament record with a 144 (71-73) after Sunday’s Round. Rylan is a Freshman at Cooper High School in Florence, Kentucky. Congratulations Rylan!

*For this event and all future events, we have created a photos@bjgt.usemail account for you to send in photos from the event that you would like to see posted on our website. We can only take so many during the event so the more the better!*

For our entire 2019 Schedule visit www.buckeyejuniorgolftour.com

A Diamond in the Ridge