Frederick, MD – May 20th, 2019 — Buckeye Junior Golf Tour held its second consecutive tournament in Maryland this weekend at Clustered Spires Golf Club in Frederick. For the first time in what feels like months, the weather was not a factor! The course itself played relatively flat and open with its main defense coming from the thick and overgrown rough and fescue. To everyone’s surprise, the much harder Back-9 produced the lowest scores of the tournament. A lot of BJGT records were tied or broken this past weekend and many of our participants reached their personal bests which really made for an exciting and rewarding experience for all. Check out how everything played out below!

Round 1 – Saturday May 18th — Simply put, we couldn’t have asked for better weather on Saturday for Round 1. No wind, blue skies and the lack of rain gear helped as our participants took advantage of the pristine weather. The Boys thought Hole-4 played the toughest on the day. A medium distance Par-4 punished those that sliced or hooked their drive. You will end up behind trees with almost no chance of getting par, which had the hole playing at almost a double bogey average. On the other-hand, the Boys played Hole-11 the best in Round 1. A short Par-4 that plays only 310-yards can actually turn on you quick if you are not accurate with your drive. A water hazard sits short to the right and long to the left, missing the fairway will prove disastrous, causing a drop and tough approach shot. Brad Freyberger from Ashburn, Virginia and Mac Arida from Gambrills, Maryland both played the hole perfectly and were able to pick up birdies. Brad Freyberger came in as our Round 1 Leader and set the all-time BJGT 9-Hole Scoring Record with a Back-9, 34. Brad had 5 Birdies in Round 1, 3 of which came on the Back-9. Brad also tied the BJGT 18-Hole scoring record with a Round 1, 71. Well done Brad!

The Girls followed suit with the Boys finding Hole-4 to be playing the toughest in Round 1. The Girls found Hole-8 to be playing the easiest in Round 1. Although the hole has relatively short yardage set to 291-yards, it can be tricky. With strategically placed bunkers and OB behind the hole, good course management is key to a low score on Hole-8. Erica Honadel, from Bel Air, Maryland chipped-in on a downhill slope to grab a Birdie on the hole and came in as our Round 1 Leader for the Girls Division.

Round 2 – Sunday May 19th — Round 2 had very similar weather to Round 1 with the exception of the humidity. Peaking at a solid 80%, the humidity added distance to drives as well as the amount it felt like players had to walk. Being the first hot and humid day of the season so far, fatigue and mental toughness started to wear thin on the final 3 holes. This was evident with Hole-16 playing the hardest for the Boys in Round 2. Clustered Spires signature hole, a 210-yard, par-3, downhill trickster, this hole was making club selection a nightmare for the Boys. Jeremy Bershak from Sykesville, Maryland and Dustin Stocksdale from Ellicott City, Maryland were the only players to grab Pars on the Hole. The Boys found Hole-15 to be playing the easiest in Round 2. This 503-Yard, Par-5 is possibly the flattest hole on the course. Its only defense is the lateral hazard on the left and for those without bug spray, the copious amounts of bugs coming off the Monocacy River. The Boys were scoring birdies all Round on this hole. Brad Freyberger, Edward Honadel from Bel Air, MD, Patrick Rowland from Monkton, MD and Andrew Roberts from New Freedom, PA all finished the Round strong and found Birdies on this hole. Brad Freyberger came in as the Boys Champion. This is Brad’s first win on Buckeye Junior Golf Tour. Brad’s drive off the tee is something to be admired by most. With relative ease, Brad can hit his driver 280-320 yards which helps him pick up a good amount of birdies. Brad’s victory came with dominating the Par-5’s, going -6 through the tournament and ultimately having the most Birdies with 7. He also played the Front-9 the best. Congratulations to Brad on his record-breaking weekend! Following his Win last weekend at The Wetlands, Jeremy Bershak shot a Round 2, 74, to come in as our Boys Runner-Up. Jeremy is a master of course management. He always seems to get up-and-down when he needs to which seems to be the difference for him not to have a bad score on a hole. For a 2nd tournament in a row Jeremy had the most Pars. Jeremy was part of a Round 2 Pairing with Edward Honadel and Patrick Rowland that all shot 36’s on the Back-9. Great job guys and congrats on 2nd place Jeremy!

The Girls were struggling the most with Hole-16 in Round 2. Just like the Boys, this is probably the toughest Par-3 we have seen on tour. Not only is the distance long, pin point accuracy is needed to land on this 33-yard deep green which can be even tougher for those not using their irons. Anywhere not on the Greenand you will find yourself in hazard or thick rough. On the other-hand, the Girls found Hole-2 playing the easiest on the day. This is the shortest hole on the course, but very similar to Hole-16, it makes for a tricky club choice. The hole plays downhill and seems to get the most wind on the course. Gianna Effinite from West Middlesex, PA made the right club choice and snagged a par. Erica Honadel was our Champion in the Girls Division. This is Erica’s 3rd win on tour this year. Erica stuck to her bread and butter of what she has used to gain Wins all season, having the most Pars in the tournament and playing the Par-4s the best. You won’t find a more consistent player than Erica anywhere on BJGT and she uses this to win week-in and week-out on Tour. Congratulations Erica! Gianna Effinite came in as our Division Runer-Up. Gianna has a great drive and hit a ton of Fairways in Regulation. She is extremely straight off the tee and uses this to her advantage when playing the Par-5’s especially. Gianna has great course management playing the handicaps in sequence with her scores. Congratulations Gianna!

We finally had great weather 2 days in a row!!! This was a great weekend for BJGT and will go down as one for the record books as we had some truly great performances. We want to thank all the players for working hard and staying positive on a hot and sticky Sunday afternoon. We also want to thank all the parents and spectators for joining us at Clustered Spires, we appreciate each and every one of you for joining us at our events and hope you enjoyed yourselves. We also want to thank the friendly staff at Clustered Spires for a great venue and excellent course management. There are only a couple more events left this season in the Baltimore-York areas so we hope you can join us! 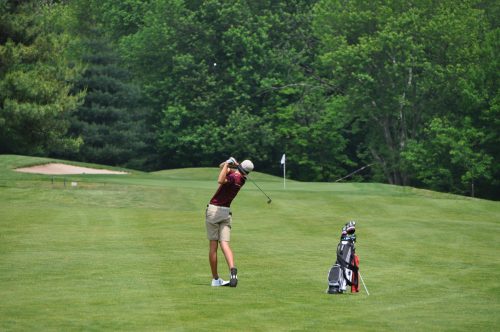 This week’s Player of the Week is Brad Freyberger. Brad set 3 All-Time BJGT Records this weekend. Brad set BJGT’s 9-Hole scoring record this weekend with a 34 on the more difficult Back-9 at Clustered Spires. Brad tied BJGT’s all-time 18-hole scoring record with a Round 1, 71. Brad also set BJGT’s Par-5 tournament record going -6 on them throughout the weekend. Congratulations on a great tournament Brad!