The (Golf) Battle of Gettysburg

Gettysburg, PA – April 21st, 2019— Buckeye Junior Golf Tour headed East again this weekend to play the beautiful Links at Gettysburg. It was a weekend filled with great players, parents, spectators, history, course conditions and of course Easter! The Links of Gettysburg proved to be one of the toughest courses our players have ever played, with the highest slope rating in BJGT history, 141. This course featured only one sub-80 round throughout the tournament.

Round 1 – Saturday April 20th—Once again we had some great weather for our first round. With temperatures hovering in the mid 70’s and the sun shining, it was a perfect day for golf. Before we knew it however, major wind on this links style course picked up with gusts whipping in at the top of some of the hills at over 20 MPH. With this already tough course guarded by water, bunkers and plenty of hazard, the wind proved to out-do all of those difficulties. Ours Boys 14-19 Division found the semi-island, 174-yard, par-3 12th-hole to be playing the toughest on the day. With a relatively high handicap of 10, for a par-3, the strong winds were causing an array of shots on the hole. The only Par of the day on the hole came from Patrick Rowland from Monkton, MD who finished Round 1 tied for 2nd Place. The Boys found the easiest hole to be the 17th-handicap short Par-5 4th Hole. The hole was playing to minus par on the day, with a huge help from Clay Breidenstine’s Eagle (one inch away from Albatross is worth adding)! Nick Caggiano from Herndon, Virginia was able to tame the wind consistently and come in is our Round 1 Leader. Our Girls 14-19 Division found the short but low handicap 2nd hole to be playing the hardest on the day. The Girls found the short Par-4 8th-hole to be playing the easiest on the day. Erica Honadel from Bel, Air, Maryland found Birdie on Hole-8 and eventually come in as the Round 1 Leader. Our Girls 10-13 found Hole-7 to be playing the hardest on the day. This is a brutal hole that not only holds the #1 Handicap out at Links of Gettysburg but is one of the hardest holes ever featured in a BJGT tournament. With water hazard on both sides, an undulating green and the farthest distance of any of the Par-5s, there is no easy way to play the hole. The Girls found Hole 3 to be playing the easiest, as this was a beautiful hole cut into a natural hill on the course. There is exposed clay rock that encircles the green and can be found on 3 other holes that created an almost back-board look to the greens. Alli Hucke all the way from Dayton, Ohio was able to find Par on the hole. Elaina Seeley was able to stay consistent on the front-9 and grab two pars on this challenging course to come in as Round 1 Leader for the Division. Jackson Hucke, aka Jacks, from Dayton, Ohio in our Boys 10-13 Division and our youngest competitor of the weekend scored a Bogey on Hole 9, one of the hardest holes at the Links. Great job!

Round 2-Sunday, April 21st– Round two featured almost the exact same weather as Round 1, sans the wind. Without the wind guarding most of the holes, every Division was able to come in with lower scores than Round 1. With 7 players within 5 strokes of the lead heading into Round 2 of the Boys 14-19 Division, a sub-80 Round was what most of our participants were eyeing for a win. Hole-7 once again show its teeth as the number 1 handicap and play the hardest on the day for the Boys. The Boys again found Hole-4 to be playing the easiest on the day, with the hole playing below par on the day. A new face on tour, E. Brooks from Adelphi, MD finished the day strong shooting +1 on the last three holes but it wouldn’t be enough. Peter Meehan coming all the way from Fairfield, Connecticut posted a Round 2 score of 75 and came in as the Boys 14-19 Champion. Peter said it best when asked about his win, “I was able to tame the beast.” Well said Peter, a win at The Links does not come easy. Peter’s win comes on top of what we have seen from Division Winners all year on the Tour. He had the most Pars of the weekend and played the Par-4’s the best. Peter is the 6th Winner on tour this year to combine both of these stats to eventually become Champion. Great Job Peter! Patrick Rowland continued his great play and finished as Division Runner-Up. Patrick’s Runner-Up finish came by playing the Par-3’s the best in the Division as well as the much longer Back-9 the best. Patrick also was Runner-Up in best dressed right behind Jackson Hucke. Great Job Patrick! The Girls 14-19 Division had to wait a hole before getting into a groove as they found Hole-1 to be playing the hardest on the day. The Girls once again found Hole-8 to be playing the easiest in Round 2. The hole featured two birdies from Ella Seeley from and Megan Brandt from Fayetteville, Pennsylvania. Erica Honadel just had too much in the tank and eventually came in as our Girls 14-19 Champion. Erica had a dominate Round 2 featuring 4 Birdies. Erica held down almost every major stats category for the Girls Division. Erica is also Buckeye Junior Golf Tour’s Player of the Week. Just an 8th Grader, Erica is showing great potential for her future golfing career. Great Job Erica! Ella Seeley all the way from Circleville, Ohio came in as our Division Runner-up. Ella’s pin point accuracy put her just behind Erica on the Par-3s and she also was just slightly behind Erica on the Front-9. Great job Ella! Once again Hole-7 proved to be too tough with it playing the toughest for our Girls 10-13 Division in Round 2. The Girls followed suit on the 4th-Hole and found it to be playing the easiest in Round 2. Elaina Seeley with her extreme distance off the tee for her age was able to find a Birdie on this hole! Elaina came in as our Girls 10-13 Division Champion. This is Elaina’s 2nd win on tour this year and she is leading the Girls 10-13 Division Player of the Year by a wide margin. Elaina had the most pars in the division and held the lead in almost every major statistical category. Elaina can absolutely crush a golf ball for her age, watching her off the tee is one of the most impressive things to watch on Buckeye Junior Golf Tour. Elaina actually drove the green on a Par-4 in our first tournament of the year. Great job Elaina! Alli Hucke came in as Division Runner-Up. Alli has an extremely different type of game than Elaina. Alli is extremely accurate and always plays the Par-3’s extremely well. Alli finished behind Elaina on the Par-3’s by just .1 of a stroke. Great job Alli! Jackson Hucke from Dayton, Ohio came in as our Champion for the Boys 10-13 Division. Jackson is an interesting player always seeming to play his best golf on some of the hardest holes on the course. When Jackson zones in with his putter, it is fun to watch. Jackson being our youngest player has trucked through our 2 hardest courses to date and always comes to the clubhouse with a smile and positive attitude. Great job Jackson!

Buckeye Junior Golf Tour wants to thank all of our players, spectators and the wonderful staff at The Links of Gettysburg, specifically Jason Pandoli and Craig Walker for their hospitality. Our parents this weekend were fantastic as well. We can’t thank you all enough for helping to look for golf balls, keeping the juniors on pace and supporting not only your junior golfers, but everyone else on the course. We have a ton of other events coming up in the Gettysburg/Baltimore/Fairfax Metro and we hope to see all of you at many more events this year! 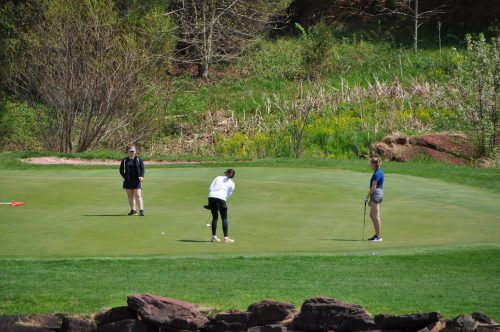