Three Rivers, MI – October 22nd, 2019 – Buckeye Junior Golf Tour held its final event of the 2019 Season this weekend at Pine View Golf Club’s Spruce Course. The Spruce Course is a challenging mix of lengthy open holes and more strategic, spruce invested dog-leg holes. Read below for information on one of the best finishes of the year!

Round 1 – Saturday, October 19th – Saturday started off with a typical Michigan October morning. A frost delay held us at bay for 45 minutes, but the extra time gave our players some much needed practice on the extremely unpredictable greens. The Boys 14-19 division started off just like the weather, cold. They were having the most trouble on the extremely long 443-yard, 3rd-handicap, Par-4 1st-hole. The hole’s only real defense is its length and with not much roll off the tee box, the players were finding it hard to get to the green in 2 shots. The Boys started to warm up on the Back-9 using the much shorter yardage holes to their advantage. Hole-14, a short Par-3 with Out of Bounds looming on the right and a large front bunker sitting in front of the green, was the easiest hole on Saturday for the Older Boys. Almost the entire field played this hole perfectly, with most finding the green off the tee. Drew Anness, all the way from Cincinnati, Ohio and local Carter Geigley from Centreville, Michigan would share the Round 1 lead, paving the way for a nail-biting finish Sunday.

Our Boys 10-13 division also started off a little cold on the first couple holes of the Front-9 with Hole-5 giving them the most trouble. Although shorter in length, this hole is tricky. Damo Watson, our youngest competitor of the tournament, was fantastic all weekend finding a Par on this tough hole. The Younger Boys took some notes from the Older Boys on 14 playing it the best in Round 1. Damo Watson, once again found Par on the hole! It was no surprise as he had a great Round 1 that Damo Watson, from Westland, Michigan came in as our Round 1 leader holding off Eain Atisha from Lathrup Village, Michigan.

Round 2-Sunday, October 20th – Sunday was a picture-perfect Fall Michigan morning. No frost, warmer temps and an on-time start made for a great day of golf and one of the prettiest days on tour this season. The warmer weather took off on average 3 strokes per player in our Boys 14-19 Division. Hole-6, the hardest hole on the course, was giving the Older Boys the toughest time in Round 2. This Par-4 is not only long in distance sitting at 420-yards, but has a tough dog-leg right towards the end of the hole. The landing zone near the green is guarded by spruce trees and makes for a very difficult approach shot. This didn’t faze Carter Geigley, he was able to hold off the rest of the competition by having the only Par from the field. The Older Boys would once again play Hole-14 in great fashion playing it the best in Round 2. Once again, the hole did not give up any Birdies but the majority of the field were able to Par the hole. Carter Geigley began the Back-9 with a 7-stroke lead over Seth Callaway from Monongahela, Pennsylvania. Seth, however, does what he does best and caught fire on the Back-9. Carter and Seth went into Hole-18 sharing the lead, making for one of the most thrilling finishes all season. Apparently, Carter has ice in his veins because his putter came in clutch when he needed it most. He sank a 20-foot birdie putt on 18 to seal the victory and come in as our Kalamazoo Junior Champion! Carter finished in typical BJGT Champion fashion having the most Pars in the tournament with 20. Carter also played the Front-9 8-strokes better than the rest of the field throughout the tournament. This was the key to winning given the distance of the front-9 and the colder temperatures. Carter is in his Senior year at Centreville High School and we wish him the best of luck as he continues his golf career in the Spring. Congratulation Carter! Seth Callaway was our Division Runner-Up. Seth had a key statistic that usually helps our players sit at the top of the leaderboard at the end of a tournament, playing the Par-4’s at least a stroke better than the rest of the Field throughout the tournament. Seth’s late surge on the Back-9 in Round 2 led him to playing the Back-9 the best in the tournament. Seth is a Junior at Ringold High School in Monongahela, Pennsylvania. Congratulations Seth!

Damo Watson continued his excellent tournament showing in Round 2 to be crowned our Boys 10-13 Champion. Damo is from Westland, Michigan and unlike his brother Troy Watson, is a huge University of Michigan football fan. One of Damo’s key stats is how well he plays the Par-4’s. Damo is always consistent, can crush his drives and is proving early in his golf career that he is going to be a dominant player on tour for years to come. Congratulations on your tournament win Damo!

This was the last tournament of the 2019 BJGT Season!?! Kicking the season off in March in Dayton, Ohio and ending Mid-October in Kalamazoo, Michigan has introduced us to so many great players, parents, spectators and course staff this season. We want to thank each and every one of you for your support and an exciting year 2. We will continue to provide you with the best 2-day JGS certified junior golf tournaments in 2020 that the Mid-West and Mid-Atlantic can provide. Please send us any information, reviews, suggestions and constructive criticism of our tour to the email listed below, we would love to hear any and all feedback. It will only help us grow as a tour in 2020! Next year’s Memberships and Tour Schedule will be going live early December, just like we did last year. Please make sure we are added to your contacts so you don’t miss the email. There will be huge discounts offered to those players that register early! Don’t miss out on the savings!!

Next week we will be sending out a special Press Release to discuss our Players of the Year and some other key players on tour from the 2020 season. After that, we will be sending out Tuesday Newsletters throughout the Off-Season for those of you who want to stay engaged with what is happening with the tour. Once again thank you for a fantastic Year 2 and we hope to see all of you out on tour in 2020 for our best year yet!

For our entire 2019 Schedule visit www.buckeyejuniorgolftour.com or click here 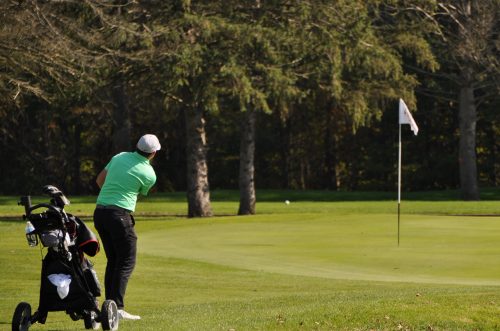 This week’s Player of the week is Carter Geigley. Carter had an impressive showing of consistency throughout the weekend and had the most Pars in the tournament. Carter was also able to dominate the Front-9 on the Spruce Course at Pine View scoring 8 strokes better than the rest of the field. Carter also tied the best score on Par-3’s. Congratulations on being named this week’s Player of the Week Carter!